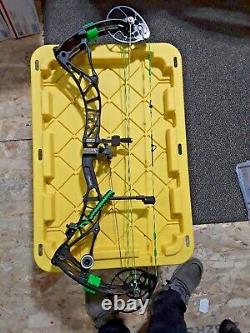 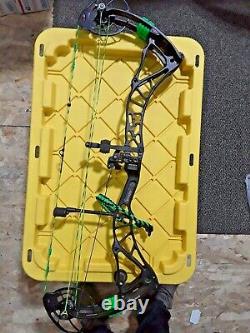 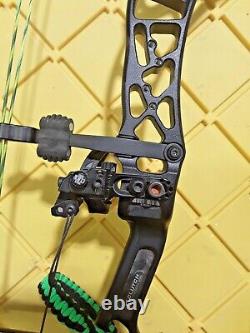 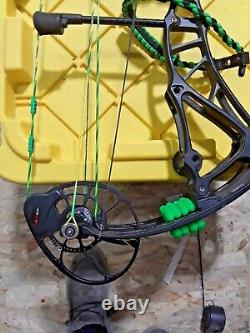 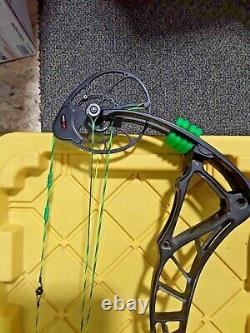 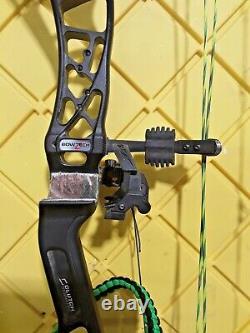 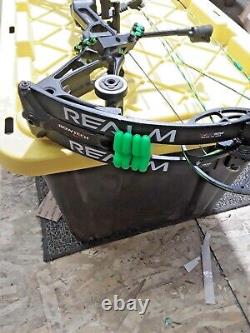 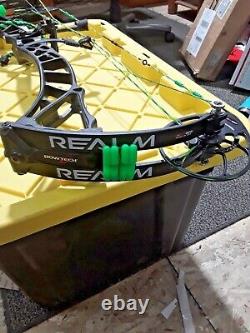 340 feet per second with 7 1/8 inch brace height. Compact 30.75-inch axel-to-axel measurement. The Bowtech Realm is an awesome bow for shooters wanting a compact hunting bow. The bare bow is pretty heavy for a compact rig with a weight of 4.3-pounds before accessories are added, but it will feel solid at full draw and many shooters prefer heavier bows for improved accuracy. The Overdrive cam on the Realm has 6-inches of draw length adjustment, and has separate performance settings to match the feel shooters want the most.

The fastest cam setting clocks in at 340 feet per second, which still comes very easily in regards to shooter effort used when getting the bow to full draw. Bowtech offers a total of five finish options, each of them looking pretty great. Everything about the bow and the shooting experience is customizable as well from where weight and dampeners can be added all the way to the type of draw cycle shooters prefer.

Engineers have redone the grip, the limbs and pockets, and the riser after completely rethinking every aspect of their new bow. Bowtech has taken it on the chin the last several years for issues with their finish, specifically on the limbs of their bows. The new limbs for 2018 are solid core limbs, and therefore will not have the problem Bowtech has experienced in the past with limbs de-laminating. Although this was perhaps more of a limb issue, the finish on the limbs quite frankly stunk. With the new design, the finish should hold up better and look nicer than past model years.

Bowtech has brought a total of five looks to the market this year, each of them offering something a little different to prospective buyers. For those not wanting a camouflage bow, Blackops and Flat Dark Earth are two solid options.

These do not blend into the surroundings as well as the camo choices, but will work still work fairly well in the timber, ground blinds, or the 3D range. For those wanting to use the Realm as a hunting bow only, Bowtech offers a total of three options including Kryptek Altitude, Gore Optifade Subalpine, and Mossy Oak Breakup Country. The riser design is a bit different from previous Bowtech models, but shooters will be able to clearly see the Bowtech design elements from previous model years.

The major difference is the integration of a caged style riser on the top and bottom near the limb pockets. This area has been widened, more than likely to account for the wider limbs and new pocket system. This design will help keep the structural rigidity of the riser and makes it less susceptible to torqueing as the cams are drawn to full draw. This does add a bit of weight to the 30 3/4- inch axel to axel bow, giving it a bare weight of 4.3-pounds before dampeners and accessories. Bowtech engineers have incorporated the FLX Guard cable containment system into the riser design.

This remains unchanged from previous model years, although the flexible roller system has functioned very well in the past without issue. It flexes inward toward the arrow at full draw to help eliminate cam lean and torque, and it flings back to rest as the arrow is fired downrange.

Although the system does feature several moving components, the FLX Guard is vibration free and quiet. Bowtech has designed some new dampeners for shooters to help keep the noise and vibration down while helping fine tune how the bow balances. The Realm comes with one, but the middle is threaded and will allow shooters to add additional dampeners onto others for the desired feel and balance. Shooters not wanting to use the new dampener can also use the mounting holes for back stabilizers or side rods as well.

There are tons of mounting holes on the back of the riser near the top and bottom pockets (three on the top and three on the bottom) for shooters to tweak and customize however they choose. The Clutch Performance grip for the 2018 Bowtech Realm is brand new. Bowtech listened to customer and prostaff feedback to design what they are calling a modular flat back grip system.

The flat back is similar to others on the market, and engineers hope it will promote better hand placement and less torque for improved down range accuracy. The Clutch grip can be removed from the back of the grip, for shooters to shoot right off the riser, or to replace with different shape or colored grips Bowtech said they would be releasing later this model year. The clutch grip should feel better to most shooters than older grips from Bowtech, which had a contour difficult for some to adjust to.

The ability to swap for different feels is outstanding as well, and adds another element Bowtech allows shooters the ability to customize. The limbs and pocket system get an overhaul for 2018 as well. Bowtech is choosing to stick with the split limb design like they have in years past in order to best utilize the very popular Overdrive Binary Cam System.

The limbs are available in 50, 60, and 70-pound maximum draw weights, which does offer the standard 30-pound adjustment range for flagship rigs, but does not have as many configuration choices as some other brands. From a design standpoint, there is quite a bit to be excited about. Bowtech has widened the limbs a bit from previous years to reduce even more system torque as the bow reaches full draw. The force the cams build up is better distributed throughout the wider limbs, and the additional strength makes everything more repeatable with less variance.

Bowtech has also gone with a solid core limb instead of their older laminated limb. This will eliminate all flaking since solid core limbs do not de-laminate.

To go along with the new limbs, Bowtech has designed a new pocket system as well known as the CP Dual Lock System. After shooters get the bow shooting to their liking, there are three screws integrated into the pocket system for locking things down and preventing any sort of movement. Each limb gets a screw to lock down to the pockets, and the pocket itself can also be locked into the riser. Like previous model years, this pocket is still a center pivot pocket system, which reduces vibration as well as giving shooters the benefits of a reflexed and deflexed riser design. Moving the pivot point to the center of the limb cuts down on vibration because less of the limb is moving back to brace after the arrow is fired. The cam system has a total of six-inches of draw length adjustability ranging from 25-inches all the way out to 31-inches, with half-inch increments managed through a rotating module system. The Overdive cam system truly stands out with its adjustability options for shooters to fine-tune virtually everything about the system to their exact preferences. The Powershift Technology is outstanding, and allows shooters to choose between a performance or a comfort setting just by switching the Flipdisc around. Doing this amazingly does not change the tune of the bow, simply the feel and performance. Shooters can choose whether or not they want a feel of a speed bow, or if they want to experience a more comfortable draw cycle. Giving shooters the ability to tweak how the valley feels and ultimately the performance of the bow is something Bowtech customers have responded well to.

It is possible for shooters to use the same bow for different situations giving it two different feels entirely. As a binary cam system, there is a split yolk on both cables, which can help archers fine tune how the bow performs to meet the exact shooting style and equipment of choice for every single archer. The top and bottom cams are the exact same, and they rotate and function the exact same.

Everything about the binary cams working together creates a solid shooting platform capable of impressive accuracy and easy tuning. Shooters choosing Bowtech love the ability to customize their rigs in every aspect especially the draw cycle. The Overdrive Binary Cam System is as adjustable as a system comes offering two very distinct feels for shooters to choose from. Regardless of which side of the Flip disc shooters prefer, the outcome is going to be impressive.

The bow is pretty heavy for a compact hunting rig tipping the scales at 4.3-pounds. However, aside from being very maneuverable in tight spots, the Realm never really feels like a 30.75-inch axel-to-axel bow, which is more than likely a combination of a heavier bow with the center pivot limbs. The shot experience between the two cams is different, but not as extreme as it has felt on other Bowtech bows with the Overdrive cams believe it or not. On the comfort setting, the cams roll over faster, which creates a deeper valley into the back wall.

Regardless of which setting shooters choose, the back wall is solid and the bow holds well on target. After the shot, the feel is customizable as well. There are tons of options for adding weight to a variety of locations with the added holes to the top and bottom of the riser.

When all tuned up, the Realm is as quiet and vibration free as any other Bowtech bow in recent years. The Bowtech Realm is a hunting bow, and it does not apologize for any of its design elements. This bow shines as a tree stand or ground blind rig, and will be comfortable packing in to elk country as well.

The Realm is a high performance hunting bow with lots of customizations and personal preferences built into the system to give shooters the more comfortable feel for their shooting needs. The Realm will probably be a frequented visitor on the local 3D course during buddy shoots, but will more than likely not be a popular choice for the serious tournament archery in 2018. The Realm is a fantastically designed compact hunting bow for diehard Bowtech shooters.

The integration of the "Smartbow" cams has transitioned to offering dampening and stabilization options to tweak everything felt on the Realm for every single archer. Bowtech has incorporated everything into this year's hunting bow, and the end result is a highly sought after hunting rig. The new limb design should address and correct past complaints with limb longevity and flaking problems, and the new grip design really shows Bowtech is paying attention to what customers are saying. For those on the market for a compact hunting bow without having to worry about price, the Bowtech Realm should be on the short list of rigs to shoot for 2018.

This item is in the category "Sporting Goods\Outdoor Sports\Archery\Bows\Compound". The seller is "podiumarchery" and is located in this country: US. This item can be shipped worldwide.